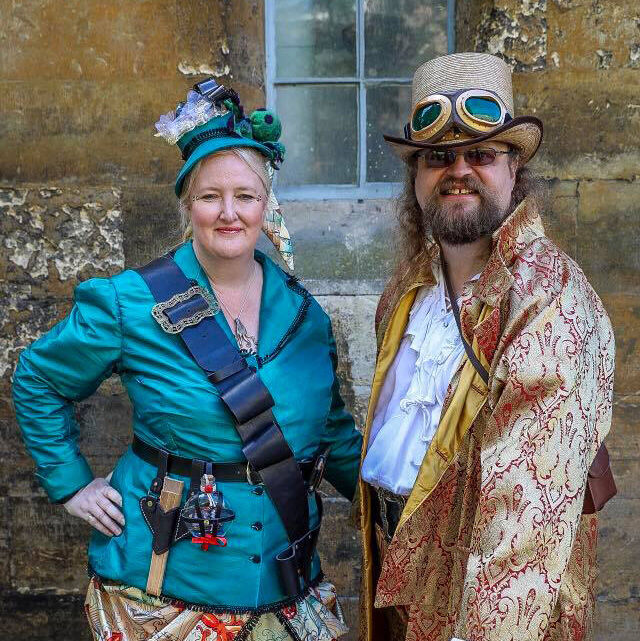 Jane & Adrian Lines - Steam Punks
This was an eagerly awaited presentation by two well-known contributors to the L&CPU and members of Chorley Photographic Society. Both are well decorated with notable accreditations; Adrian receiving MPAGB, FBPE, ARPS and EFIAP and Jane MPAGB, LRPS, BPE5* and it just so happens that they are married to each other.

Both Adrian and Jane for the last few years have been masters of making and telling stories within their photography. They take a good well-exposed image and using simple but effect Photoshop adjustments turn it into something outstanding which is no doubt reflected with the amazing competition and exhibition success that both of them have had.

Their presentation is about how two very close photographers, often taking images of the same thing through a separate creative process end up with different interpretations of the same story or even completely different stories. Both Adrian and Jane take advantage of a large number of costumes enactments, steampunk festivals that we have in the UK. The subjects have the grounding of great stories and their unique look or costume assists in creating context, for a compositor that is gold dust!

Adrian started first with his batch of 20 composite images. All of his images were put into a slide show and each image was broken down into its constituent parts to enable us, the viewer, to understand what he started off with, how he put the images together using layers, what story was being told and how he used about 6 – 8 Photoshop skills to achieve the end result. After each composite was constructed through his presentation Adrian then de-constructed it, which was a nice reminder of how each part linked into each other.

Adrian looks for original images of people with drama or humour to assist with a composite. He used to be a photographer relying on a spray and pray philosophy (we have all been there, and some of us still are!) but in recent years he is akin to taking a more deliberate and measured approach to his art, spending his time looking for the right shot or the shot that has a grounding of a good story rather than wasting time taking stacks of images in the unquestioning hope of getting at least one great shot. This measured approach leads into his story creation - when he has an idea everything is planned from the subject, perspective, colour/mono, everything. If an image has a strong narrative – an implied story - it has the effect of drawing viewers in. Adrian explained that he takes lots of images just of things that may one day be used in his composites. This ranges from interesting skies, cityscapes, landscapes, animals’ tress, buildings and textures etc.

In Post Processing – Adrian relies heavily on Dodge and Burning a subject (and full image) stating it is the same as a lady applying makeup to herself. It allows the subject to ‘pop’ and when that happens it has the effect of changing a normal image into something that the judge notices. Adrian will break up an image in parts; subject, foreground, background, sky and process all separately on different layers and blend them together. Adrian will not rely on one filter to create an effect; he completes lots of localised dodging and burning as this helps the blending process because he has full control of where the post-processing is applied.

They were both keen to explain that any good image needs to have a feeling of depth within it, especially when we take what is a three-dimensional view and place onto a two-dimensional medium. A composite image is no different, it needs to have depth but the depth may have to be artificially created, Adrian informed us that he creates depth through the use of dodging and burning his images. In essence, by removing contrast from the background and adding it to the subject, depth and separation are created. Adrian believes it is important to make a visual connection between the subject and the background. He uses colour to do this by ensuring a colour used on the subject is also present in the background. This effect visually and unconsciously links the subject to the background helping to blend all the parts of the composite. This same technique was used by great painters such as Constable to link the background with subjects within his landscape works.

Jane’s presentation of her 20 images was similarly put together showing the construction and deconstruction of her images. Although she had a decent number of composites to show us, she also displayed a number of single images where similar post-processing skills had been used. Like Adrian, she relies heavily on creating depth in her art by separating the subject from the background. Jane uses a Levels adjustment to reduce contrast in the background whilst increasing contrast in the subject. This makes the subject ‘pop’ of the background creating depth in the image. When taking images to be used in composites she is keen to ensure consistency is maintained in terms of the height of the camera when taking the shot. If this is not consistent the constituent parts of the composite will not blend together in a natural way. This is the fundamental core of being a successful compositor – it is having the ability to take at least two different images and blend them naturally into one image.

Jane showed us a number of examples where she had taken the same subject matter as Adrian and had turned the final image into something very different. What this all boils down to is our personal interpretation of any given situation, which is influenced by our personality, our values and who we are. They all contribute to our main storytelling tool, which at the end of the day is our imagination. A compositor who is equipped with a vivid imagination can produce absolutely anything and it will be completely unique.

This was an excellent presentation where Adrian and Jane were successfully able to demystify the world of composite storytelling through post creative photography. All we need to do now is learn a couple of basic post-processing functions and then the only barrier to our success is the limitation of our own imagination.