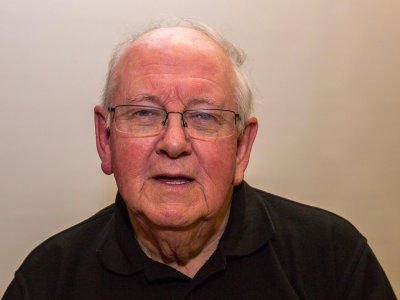 Bob Dennis
Still full from Christmas turkey and well marinated Christmas Cake 25 members from Mid-Cheshire Camera Club (MCCC) armed with a fist full of New Year’s resolutions descended on the Dingle Community Centre for our first club meeting of 2020.
It just so happened that our first meeting back was January’s Open 4 Competition. Our Judge for the night needs no introduction and is a long-time friend of MCCC; Mr Bob Dennis from (APAGB / CPAGB / AFIAP / BPE4*) from Bebington Photographic Society.

Bob has been a member of Bebington P.S. since 1983 and held a position on their Committee since 1984, being President on several years. Bob joined the Executive of the Lancashire & Cheshire Photographic Union (L&CPU) in 1990 taking up the role of President in 1997 & 1998. Bob is a photographic Lecturer and Judge and was placed on the L&CPU Roll of Honour in 2005 and had the APAGB Distinction of the Photographic Alliance of Great Britain conferred on him in 2004 for Services to Photography. Bob runs the Bebington Salon of Photography which is a National competitive Exhibition and is part of the British Photographic Exhibition Circuit (BPE).

Tonight, Bob had a total of 57 images to judge which was made up of Prints and Projected Digital Images.

As this is an Open competition, members are able to submit images from any genre. Genres from tonight’s selection of images included: Portraiture, Journalism, Record, Architectural and Natural History.

Photographic Competitions are great fun and a great place for any person with some competitive spirit to get involved in the cut and thrust of Club Photography. Club competitions focus your mind and allow you to put the information learned from members’ evenings into practice.

Bob’s feedback across all the images was detailed, honest and informative. All submissions were given fair critique and advice as to how the image could be improved. After Bob’s hard work the results were in.

Congratulations to all the winners and runners up and a thank you to all the members taking part. A final big thank you goes to our Judge – Bob Dennis, who provided us with sound and honest feedback throughout the whole evening. We look forward to seeing him again next year.