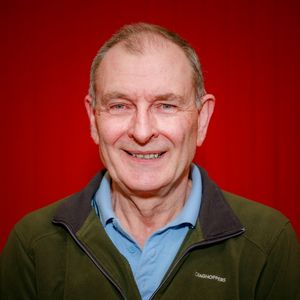 Roger Evans
An intimate group of Mid-Cheshire Camera Club members were treated to a delightful and at times humorous presentation by long-standing friend of MCCC, Mr Roger Evans (MPAGB, EFIAP/b, FBPE) from Wrekin Arts Photographic Club in Telford. Roger’s last visit to MCCC was in March of this year when he judged the last seasons annual PDI competition.

Roger has presented how he got into sports photography before but his latest presentation was different. It was not just how he took the shot or what settings, his presentation was holistic going into detail about the logistics of becoming an accredited photographer, getting to Australia, accommodation, getting around the venues, dealing with the weather, talking images for his Agency versus talking images for himself, kit he took with him and the kit he hired while there, in fairness this was a root to branch account of his two weeks photographing professional athletes as an accredited Sports Photographer.

Throughout the presentation, there were plenty of images complete with metadata detailing exposure, shutter speed exposure bias and ISO. This information in itself was incredibly informative as even professional photographers like Roger are not afraid of using high ISO to ensure a fast shutter in order to obtain a sharp image.

Roger explained the difficulty of obtaining a plain defocused background was sometimes impossible especially with the colour branding that the Australians had used all around the various sites and stadiums for the event. Getting the background to blur was the easy thing but the use of bright branding sometimes still made it difficult for the athlete to stand out in the image.

Roger discussed the type of images that his Agency would be looking for or expecting such as medal award ceremonies and people’s reaction to things rather than the actual action. This could be in relation to a team scoring a goal or similar. The celebration rather than the goal scoring was more important to his Agency.

It was clear to see that Roger has an in-depth knowledge of athletics especially Artistic Gymnastics. This knowledge assists him in being able to second guess or sense the next move or what the athlete is planning next. This knowledge helps Roger to anticipate the shot so he is able to capture the action or reaction during an event.

Towards the end of the presentation, Roger informed us of the problems that he faced such as shooting into the sun. The photographers or Togs as he usually referred to them to some extent had no choice as to their provided location to shoot the event. Sometimes this meant shooting into the sun which did not make for the best images. Other problems related to the colour of the sand used in some events like the long jump. The sand was white making it difficult to obtain a balanced exposure across the whole image. At times the sun went in and was replaced by torrential rain. Keeping one's kit dry was also a challenge.

After two weeks and 22,000 images later, Roger returned home for a well-earned break. This was a really interesting account depicting a ‘warts and all’ insight into life as an accredited sports photographer where the pressure is high to obtain the best results in some difficult situations. The photography showed to us was second to none and I personally look forward to seeing more of Roger’s work from this event in upcoming exhibitions.