A healthy number of Mid-Cheshire Camera Club (MCCC) members descended on The Dingle Centre for the first of this season’s practical evenings. Armed with Canons, Nikons, Fuji and the occasional Panasonic, members donned their kit with a certain protective elegance over their chosen choice of camera. It is great when the club puts on a practical evening. It is a good opportunity for a social evening whilst also taking in some really good learning. It is fair to say not many of us would be able to get an opportunity to photograph a dance model in a studio setup. For the budding portrait photographers in the club such as myself, a person study such as this is very exciting. 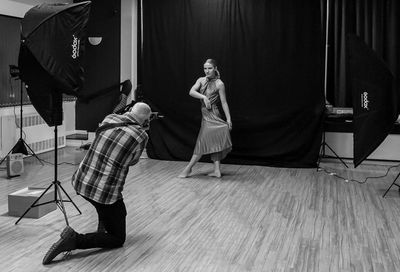 Model Dance -Three Light Set Up
Ray Girling was working furiously assisted by other members in erecting backgrounds, modifiers and light stands, adding the final touches of flash power to ensure a pleasing exposure. Ray created a three-light setup comprising of two Goddox QT600 600watt side lights modified with 3 x 2foot rectangular softboxes complete with grids which were set roughly at 90 degrees to the model. The Key or Main light was a single Goddox AD200 200watt strobe modified with a 2foot square softbox which was added to camera left. All strobes were balanced to produce F9 at a shutter speed of 1/160th with an of ISO200. This setup was put up against a black background providing an environment and look that a lot of members will recognise from Ray’s images. This style has proved very successful for him over the last few years with a number of local, regional and BPE awards.

Members got started after Ray introduced our lovely model Rachel Gittings. Having set up their cameras, members took turns to photograph Rachel in action. More experienced members were on hand to assist where needed ensuring everyone got some learning, experience and enjoyment from the session. 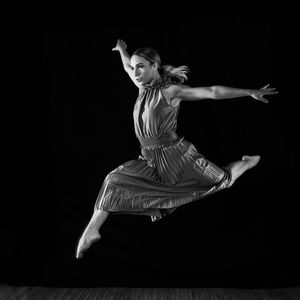 Rachel Gittings - Dance Shoot
Having had a go myself I did find it quite difficult to obtain the image that I wanted in the split second that I had to take the shot. I found myself realising a deeper respect for Ray shooting with this type of photography as it is quite difficult to get a great composition especially when the luxury of blasting one’s motor-drive at 10 frames a second is not available. I was quite pleased with the initial result that I obtained but on closer inspection, I noticed some blur in the extremities of the moving model and decided to investigate why this was. I do not generally write technical news articles for the club but I think in this case I will make an exception as I think there is some additional learning that I may be able to pass on to members. In doing so, I will cover some basics of flash exposure just so the wider reading audience know exactly what I am talking about.

Those of you who have worked with flash before will appreciate the additional thinking that comes with using flash. As photographers, we usually talk about the exposure triangle being made up of aperture, shutter speed and ISO. Your subject and photographic style it will depict how each of these three values relate to each other. When using flash, we have another element to add into the mix and that is flash power and more importantly how we balance the flash power with the available ambient light. The general rule is shutter speed controls the amount of ambient light coming into the image and aperture controls the amount of flash power being seen by the camera. 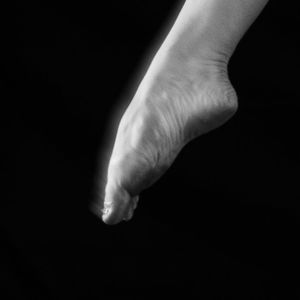 Dance Shoot - Motion blur
Now if our subject is static, we will be able to balance the ambient light with the flash without too many issues up to the sync speed of our camera. Most modern cameras have a sync speed of around 1/200th second and this the maximum shutter speed you can use with your camera when using flash. So, using a shutter speed for a static subject from 1/125th to 1/200th of a second will be more than enough to freeze the subject irrespective of how much ambient light you want to bring into the image and fall onto the subject. However, when taking images of a fast-moving subject it gets a little more interesting. For example, if we were photographing a dancer in daylight, we may need a shutter speed of anything from a 1/1000th to 1/2000th to freeze the action as they jump around. These speeds go way beyond the sync speed of our cameras, so the way we get around it when using flash is to ensure we eradicate all of the ambient light in the image and the only light, lighting our subject comes from our strobes. What does this mean? Well, when a flash fires, irrespective of the flash power setting, it flashes at the same power, it is the flash duration that changes that allows the power to increase or decrease. The flash duration of the QT600 strobes set at 8 power is 1/2014th of a second and our Key light - the AD200 which was set to full power is 1/220th – you will notice there is quite a difference in flash duration. In an environment where there is no ambient light, your shutter speed is effectively replaced by the flash duration of your strobes. With that in mind, I think possibly two things have happened that has resulted in motion blur being present in my images.
There has been a lot of techy talk in this article but I hope that my learning journey has also benefitted members who may have experienced similar results to mine. I think this opportunity to learn as a group is extremely rewarding with the added benefit of acting as a good social session when waiting for your turn to shoot. I look forward to the next practical when I can try out some of the solutions with a view of taking sharper images.

I would like to offer my sincerest thanks to Ray Girling for his time and effort in creating and presenting his PowerPoint in preparation for the evening and arranging and hosting the actual practical session.