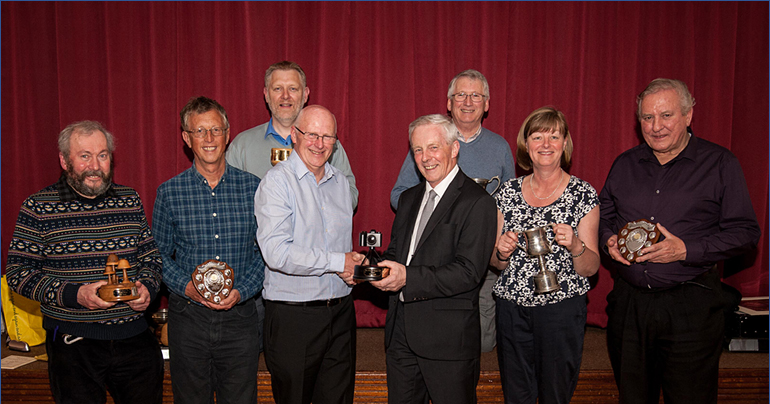 Mid-Cheshire Camera Club AGM & Awards Evening
At this year’s AGM held on the 11th May, outgoing Chairman Ray Hill gave his report on the past club year commenting in particular on the 40th Anniversary celebrations. The digital photo-book of members’ favourite images had been a great success and an outing to the Black Country Living Museum in March had been enjoyed by all. Now at the end of his three years tenure he thanked all members for their enthusiasm and support and the Committee for their hard work which had made his job an easy one. New Chairman Ian Whiston thanked Ray saying he hoped the club would continue to flourish as it had during Ray’s time in office.
After a buffet supplied by Noden’s bakery, Winsford, it was time for the guest of honour Alan Warburton, Town Clerk, to present the club’s annual awards. Ray Girling received a whisky tumbler for winning Print Photographer of the Year with Ian Whiston in 2nd place and Kath Hill in 3rd. Ian Whiston also received a whisky tumbler for winning PDI Photographer of the Year with Ray Girling 2nd and Jim Cain 3rd. Richard Morris was first in the Beginner PDI League followed by Paul Wilcock and Joffre Trotman in 3rd position.
Alan Warburton had many hands to shake as he presented the cups and certificates of merit to the successful participants in the recently held Annual Print and PDI competitions. Ray Hill announced that there will be a new award called the Andy Adams trophy as a way of remembering Andy who had done so much for the club over many years but had sadly passed away recently. He then thanked Alan and his wife for coming along and presenting the prizes and wished everyone a very happy summer full of photo opportunities.
Club members are invited to meet fortnightly throughout the summer at The Gate pub in Delamere Street from 25th May with the regular weekly meetings at the Dingle Centre resuming on 7th September.
Kath Hill
MCCC Secretary
Previous
Next
Next
Previous