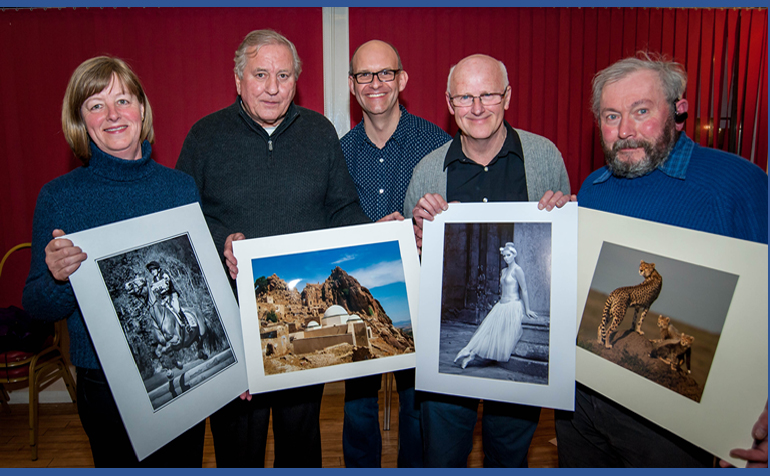 Last night, guest judge Darrell Oakden DPAGB of Alsager Camera Club had a serious task on his hands as he considered 130 prints entered into the club’s Annual Print Competition.
Darrell gave a short but positive critique of every image spanning countries and subjects from India’s Taj Mahal, to Liverpool’s statue of the Beatles, to Cheetahs in Kenya. He reminded members that photography is subjective and what matters most is not his opinion but that of the photographer.
Many images were awarded a Commended or Highly Commended and at the end of the evening the winner of each section was revealed:
Open Beginners – Berber Mosque by Joffre Trotman
Creative – Body Screen by Ray Girling
Record – The Beatles by Ray Girling
Portrait – Horace Silver by Ray Girling
Mono – Ballerina by Ray Girling
Natural History - Cheetahs looking for Prey by Ian Whiston
Landscape – Morning Run at Marbury Park by Ray Girling
Open Advanced – Spooked by Kath Hill
Darrell was asked to choose an overall Best Print and the winner was Ian Whiston’s Cheetahs looking for Prey.
The image, taken by our Press Officer Ken Hewitt, shows the winners and their prints from left to right – Kath Hill, Joffre Trotman, Ray Girling, Ian Whiston with judge Darrell Oakden at the back.
Kath Hill, Secretary
Previous
Next
Next
Previous